I know it’s been a long time since I last wrote on my blog. I spent 3 years of my life managing every aspect of an art Gallery and while it was a lot of work, I had a lot of fun as well. As if it wasn’t hard enough, I also had to deal with health issues with a thyroid cancer diagnosis right after I turned 40. It was during a trip to France to get my operation done earlier than in Canada that I visited “l’Atelier Céramique de Saint-Amans” in 2018. Here are the pictures I took of this lovely studio space, set on top of a sinuous countryside road in the middle of beautiful hills. Sylviane Perret, the artist, is a lovely lady who kindly agreed for me to visit her place. Her work has strong Japanese influence and she uses local clay for both her functional pottery and sculptural work.
Here are the picture of her magical space. 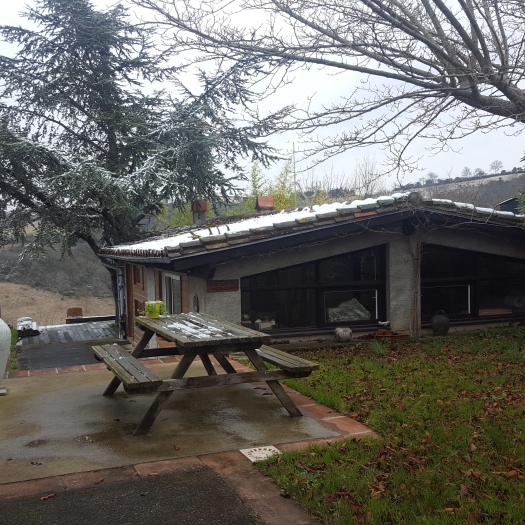 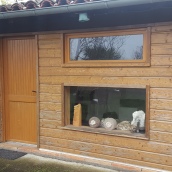 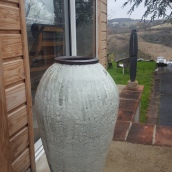 Inside her studio she had built a very interesting gaz kiln with an opening mechanism that made it easy for her to fire her work. 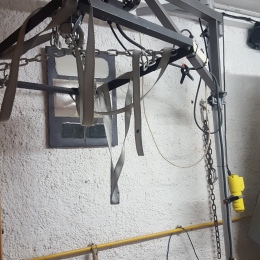 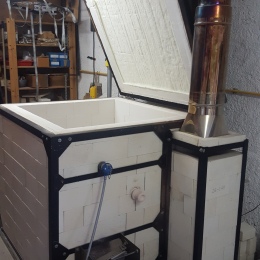 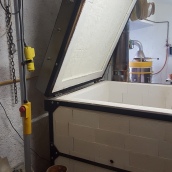 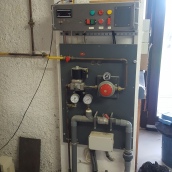 Here is the latest flyer for Galerie Côté Créations. Wishing Hanna MacNaughtan all the best in her artistic pursuits. Her work is available at Santini Gallery and Kevin Dodds Gallery in Ottawa and in other galleries outside of town. We are pleased to welcome Wendy Feldberg in our group. 🙂

Last week-end, I went to what now feels like my personal pilgrimage, my annual rendezvous with local clay artists and friends: 260 Fingers (Glebe Community Centre, Ottawa). I usually peruse the aisles, mostly chatting with colleagues, longing for work by mentors and friends Leta and Don Cormier, checking out what other artists have been doing, discovering the year’s guests, wishing I was one of them some day, except that this year I came back with 2 pieces. Part of the reason I bought pieces this year is because I have been working as a Gallery Artist/Curator/Manager and I often hear people saying ”I’ll buy from you next time, next year…”, which always feels as a missed opportunity for both the artist and the potential collector. And I realized I had been doing the same for a few years, though to be fair I haven’t had any so-called “income” in a while being a full-time artist and mother to a toddler. This year though I allowed myself to indulge in buying art pieces I will treasure, while also choosing consciously to reinvest some of my earnings into the Arts Community.

Display by Leta and Don Cormier 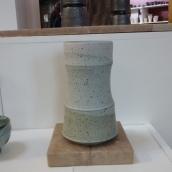 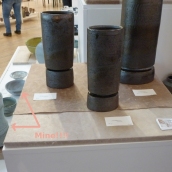 Display by Leta and Don Cormier

I talked to Toronto artist Chiho Tokita, whose sculptures allude to functional work. I loved the fact that she works with coils and through addition and subtraction, constructs her pieces without the use of a mold. My favourite was the one that looked like a boat, of course… 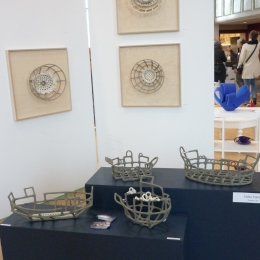 This year, one of the guests’ work by Toronto artist Jeannie Pappas, reminded me of local artist Stefan Thompson, whose work I always found a little creepy but fascinating to look at. This is what I mean. 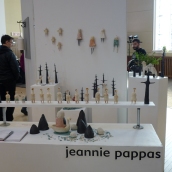 I was also pleasantly surprised by the direction artist Susie Osler is going. I knew of her colourful work but it never resonated with me as much as her series called “Objects for the hand and heart” does now. I can’t wait to see where it will lead her. The pieces are so tactile, soft like bones and antlers can be, “spirit-like” in their white porcelain body, cold to the touch, organic in their shape and “shamanic” in nature. Loved, loved, loved. 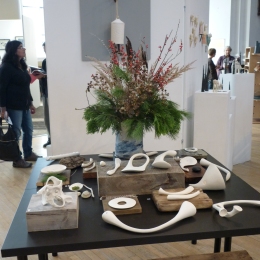 Early June this year I have embarked on an exciting journey as an Artist, Curator and Manager for a Pop-up Art Gallery in Westboro Village (in between two trendy Ottawa neighbourhoods Westboro and Hintonburg).
It is called Galerie Côté Créations after the artist who got the space in the first place, Yan-Éric Côté (a painter from the Mont-Tremblant area).
We’re located on the ground floor of a complex of condominiums in an unfinished retail space and it is gigantic so much so we’re using only half of it.

Front of the Gallery.

We give part of our proceeds to the Ottawa Hospital Foundation.
We’re now 12 artists + a pianist-in-residence who comes to play almost every day we’re open on his baby grand piano.
Our address is 98 Richmond Road (just west of Island Park Drive, across the CIBC). We are open Tuesday-Sunday, 11 am – 6 pm except for the first Thursdays of the month (until 9 pm). 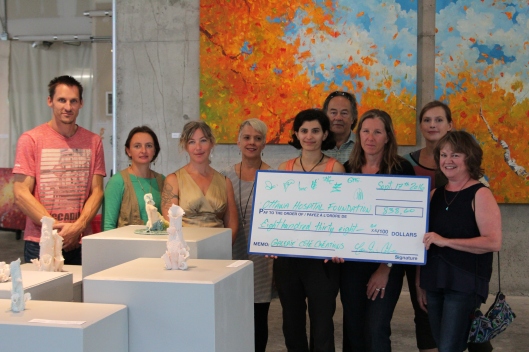 I am proud of what we have accomplished so far and will keep on improving our customers experience. 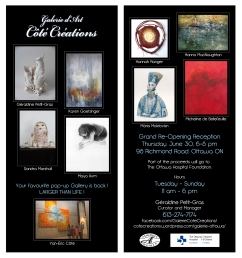 Front and back of our flyer. 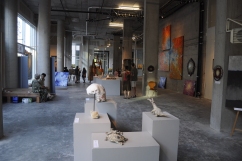 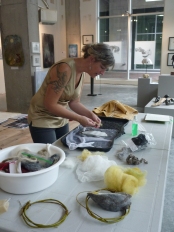 Hannah Ranger demonstrating her feltmaking techniques during our Open House (09/17/16). 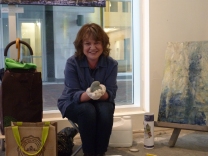 Poster for our 1st Thursday of the month – Art Walk.

Stiched paintings by Karen Goetzinger and Watercolours with oil pastels by Alena Liapko.

When nature feels at home on my work, I can’t stop thinking I must be doing something right.

Sculptures by Cairn Cunnane and paintings by Yan-Éric Côté. 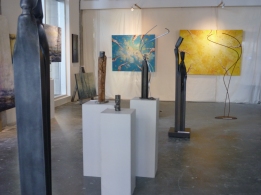 Panorama of the Gallery.

While distributing pamphlets downtown at the Ottawa Art Gallery I visited the exhibitions of two of my friends/colleagues were having an exhibition this summer: Gail Bourgeois and Paula Murray.

“Correspondence” – From roots to rhizomes to mycelial networks – by Gail Bourgeois
June 4 – Sept. 18, 2016
I was particularly attracted to her abstract shapes on Mylar. 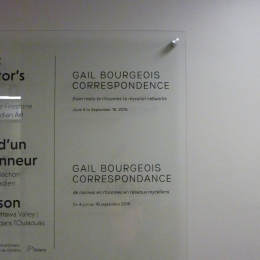 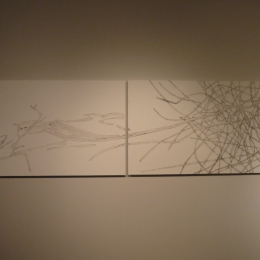 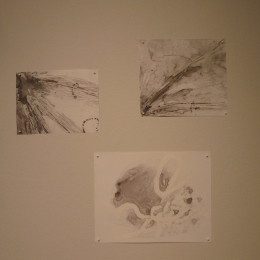 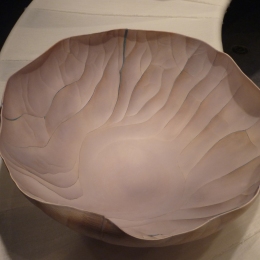 Recently, I had one of my pieces (one of the 3 ”Arrested Development” black and white pairs from the Series ”Mute Message Down Under”) purchased by a customer from Laval, QC.

It is meant as a gift for his mother’s birthday. Since I found it was a lovely reason to buy one of my pieces, I decided to make a box for it to travel safely and be worthy of the gesture. 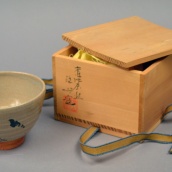 I have always admired the Japanese for being very thoughtful regarding the packaging of their work as they believe it to be an extension of the work itself. Called ”Tomobako” (accompanying box) it serves as a means of storage for the artwork and a way to authenticate the piece as the maker often puts his mark/brand on it.

Here are few interesting sites to learn more about Tomobako: 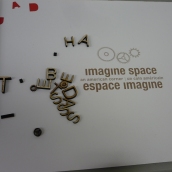 For this project I had in mind to use one of the available laser-cutters that our city library owns, in Ottawa’s first public makerspace. I had been ”certified” to use it in 2014 and had not had the chance to use it yet. It took a first failed attempt to realize that even with the knowledge I have in design softwares, Inkscape or SketchUp are hard to understand. Because I needed to deliver the artwork in the following weeks, I had no time to learn how to use them, which meant I had to look online for shortcuts.

While I was told one could get designs from Thingiverse where I found an awesome box (maybe for later), due to size constraints I instead went for an online software that is especially designed to deliver a file to make boxes called MakerCase. 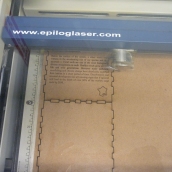 Once the pieces were cut by the laser, I realized the thickness I entered for the wood was not quite right so the junctions do not fit seamlessly. As well, there was a strong burnt smell. So I thought I’d get rid of it by rubbing the cut parts with baking soda… It made it smooth and less smelly but I left the pieces outside for a few days to air as well. I used No More Nails glue on all the pieces except for the lid of course and since it didn’t dry transparent (yikes!) I resorted to painting the seams with Van Dyke Brown acrylic paint. It made the seams shiny again.

Being a first, the result is not perfect but overall, I’m pretty pleased with it and was proud of the astonishment of the buyer’s friends who would deliver the box later in the week. I just hope my customer’s mom doesn’t mind that I put my artist statement in English only… 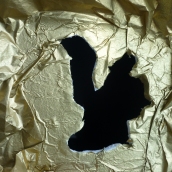 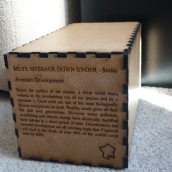 Finally I found time to go to the Ottawa School of Art to use their movie editing software and put this interview together. Mind you the next day there was a giant sinkhole downtown right where I passed by to go home afterwards. Being an artist is risky business. 🙂

It is now up and running on my YouTube Channel. This was done last year during the opening of my end of Artist Residency at the Ottawa School of Art.

Dawn Dale, artist, friend and mentor, was kind enough to do it and did a great job. I’ll let you be the judge of it.

I went for the first time to studiosixtysix which stands for the actual address of the Gallery (66 Muriel Street, Otttawa). There was a vernissage for emerging artist Alana Latincic. The show title was ”the game doesn’t start until you say YES”. It had digital prints of abstracted shapes of video game consoles, a video one could influence by using a game controller and 3D printed objects reminiscent of her printed images all pertaining to her exploration of the video game culture.

In the Gallery, there are a few professional studios and art practices as well as some walls that were showing works from recent past exhibitions. I found it was an interesting concept. It took a few pictures without the flash so they’re a bit dark.

This is the first event organized by the Young Arts Leaders Collective that I went to. It was a panel of accomplished artists and non-artists who also happen to have given back to the arts community in one way or another. They were discussing their big breaks, tips and what to do’s and don’ts through a series of questions. I don’t remember the facilitator’s name but she did a great job.

Another interesting thing was the venue itself which is a store on Wellington called Maker House
They were streaming live during the event and the footage can be seen on YouTube.

Here are some of the key-points I retained:

From there I took upon myself to start a conversation with one of the people who had just left from the panel. She happened to be the owner of studiosixtysix, Carrie Colton. She mentioned their upcoming exhibition as well as a potential opportunity for me to show my work in November. I had heard of the place and have a friend living nearby so I took this chance to visit the Gallery. This is my next Post’s subject.

Here are some pictures of the Ottawa Guild of Potters Spring Sale that was held this week-end at the Horticulture building, Lansdowne Park (Ottawa). It is a beautiful venue. Congratulations to those who won prizes at the Exhibition part of the Sale! 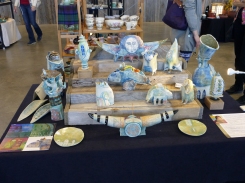